Pregnant? You Should be Concerned about Food Safety

Food-borne illness outbreaks are big news on prime-time TV, and odds are that you’ve had a case of food poisoning yourself. During pregnancy, you’re more susceptible to food-borne illness—and it can hurt your baby too. But, with some food safety knowledge and safer food handling, you can keep yourself and your baby healthy.

Food poisoning refers to more than just eating “bad” food. Most food-borne illness is spread through poor hand hygiene, keeping food at room temperature too long or not cooking it to a hot-enough temperature. Many illnesses are passed from hand-to-hand contact (especially in crowded places like cruise ships) and hand-to-food contact. For example, bacteria can be spread from infected food-handlers or workers who don’t wash their hands properly. 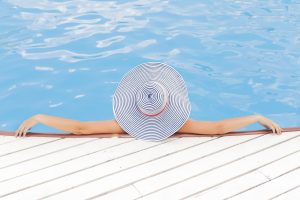 Water you come in contact with while swimming could put you at risk for illness if the water has a high level of bacteria.

Also, some illness is spread through contaminated water that you might come into contact with. For example, at your local swimming pool, lake, the beach or through contaminated drinking water. No surprise: produce or seafood that comes into contact with water containing sewage can also cause serious illness. However, this is more of a problem in under- or undeveloped countries.

Illness-causing bacteria, viruses and even parasites—can be killed by cooking to a proper internal temperature. That includes common pathogens like Salmonella, Campylobacter, E. coli, Clostridium, Staph, Strep, Toxoplasma, Hepatitis A, Rotovirus and Norovirus. Some bacteria are hard to kill—and one bacteria—Listeria—can survive refrigeration. Let’s talk about two really bad “bugs” to get while pregnant.#Pregnant? Get important #FoodSafety advice here. bit.ly/2cj4W0v Click To Tweet

Kick these bad bugs to the curb with food safety tips!

Listeria is a stubborn little bacteria that can grow and thrive in your fridge. You can get sick from any uncooked food you eat that’s been contaminated with bacteria. It’s even more likely to happen with Listeria. Listeriosis causes flu-like symptoms but if listeria is passed on to a fetus, it can cause you to have a miscarriage, premature birth, or give birth to a stillborn baby. Prevent Listeriosis by following these food safety tips from the CDC: 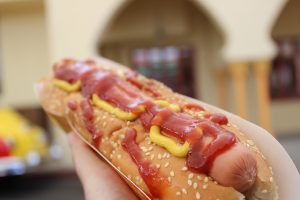 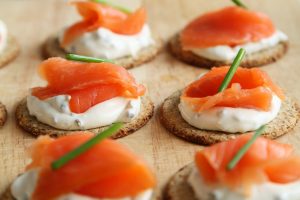 Smoked salmon like this is a no-no during pregnancy unless heated to steaming! 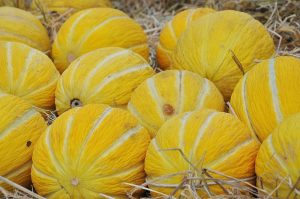 There have been big food-borne illness outbreaks linked to melon. Wash well!

Canadian women get similar eating advice regarding how to best avoid Listeria. Advice from other countries is slightly different: In Australia, pregnant women are advised to avoid soft white cheeses, like brie and feta, pâté, oysters, pre-packed salads and soft serve ice cream.. In the UK, women are told to avoid mold-ripened soft cheeses such as brie, camembert, chèvre (goats’ cheese) and others with a similar rind; soft blue-veined cheeses, such as Danish blue, gorgonzola and Roquefort, unless heated to steaming, and all types of pâté, including vegetable pâté.. In France, the advice is similar, with the addition of avoiding rillettes, foie gras, the crust of cheese, unpasteurized cheese, tarama (a fish roe salad) and raw germinated seeds.

Toxoplasma gondii is a parasite carried by cats and can also contaminate food. Toxoplasmosis may cause mild flu-like symptoms in pregnant women, but if the parasite is passed on to a fetus, it can cause preterm birth and stillbirth and can be the cause of learning, visual and hearing disabilities later in childhood. Toxoplasmosis can result from eating undercooked meat and poultry or unwashed fruits and vegetables, from cleaning a cat litter box, or from handling contaminated soil. 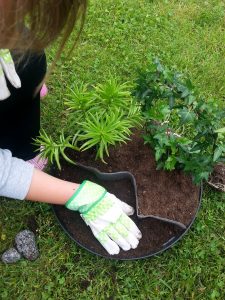 Make sure to wear gloves when gardening and emptying cat boxes.

You can reduce severity of the disease with antibiotics, but prevention is best:

For more information on Toxoplasmosis, see the March of Dimes.

Special eating tips for the holidays from the CDC.