If you’re pregnant or trying to be, this might be a burning question–Can I still drink coffee?

I’m going to cut to the chase and give you the answer–YES! But the next question is not so easy to answer. How much coffee can you drink? It depends on who you ask and where you are in your reproductive life.

First, let me tell you that coffee is not necessarily an unhealthy drink–but it is the most common source of caffeine–the most-used legal drug on the planet. (Check out my other post here: Caffeine Content-a Mom Need to Know)

Besides the caffeine, coffee does have some health benefits for everyone. Research shows that coffee drinkers have a lower risk of type 2 diabetes, Parkinson’s disease and dementia. They also have fewer cases of certain types of cancer and stroke. But there is not iron-clad proof–just associations. Coffee does have small amounts of minerals and antioxidants, which can improve how the body uses insulin.

But back to the question at hand. Pregnancy. There have been decades of discussion about caffeine during pregnancy. And guess what–we still don’t know the exact amount of caffeine that’s safe. So to be on the safe side, The American College of Obstetrics and Gynecology recommends no more than 200 milligrams of caffeine per day. (In my book Eating Expectantly, I follow the better safer than sorry approach and recommend no more than 100 mg of caffeine per day.)

But in a very recent review of 58 studies looking at the reproductive effects caffeine and fertility, it concluded that 300 mg of caffeine per day during pregnancy can be consumed “without significant concern for overt adverse effects.”

How does that translate to what’s in your cup of java? That depends on the coffee bean, how it’s roasted, how it’s ground and made.

Drinking larger amounts of caffeine may increase risk of miscarriage, preterm birth and growth restriction. But as they say, the dose makes the poison. In a 2014 study in BMC Medicine, every extra 100 mg of caffeine increased the risk of preterm birth by 13%.

If you have health issues that could be affected by caffeine, like hypertension, it’s best to cut your caffeine intake, including coffee.

Also if you have a history of miscarriage, or of having preterm or low birthweight babies, it’s also a good idea to cut way down or cut out all caffeine, at least in the first trimester. 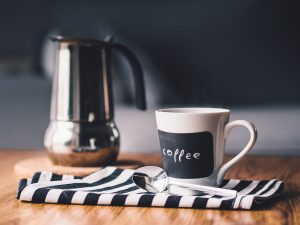 Using caution with coffee and caffeine intake is a good idea while trying to conceive too, especially for the guys.

In some studies, men who drank more coffee took longer to get to a confirmed pregnancy, though some studies showed no effect. But caffeine from cola-containing drinks and caffeine-containing soft drinks and energy drinks did affect semen volume, sperm count and concentration. However that finding could be due to high sugar content of those drinks and their effect on insulin.

A 2016 study found that caffeine intake did not affect fertility in women and in general the research about caffeine and female fertility is inconsistent.

The bottom line: Yes you can! Enjoy 1-8 oz cup of coffee a day and use the tips above to get less caffeine.

Caffeine and risk of low birthweight.

Coffee and caffeine and male infertility.